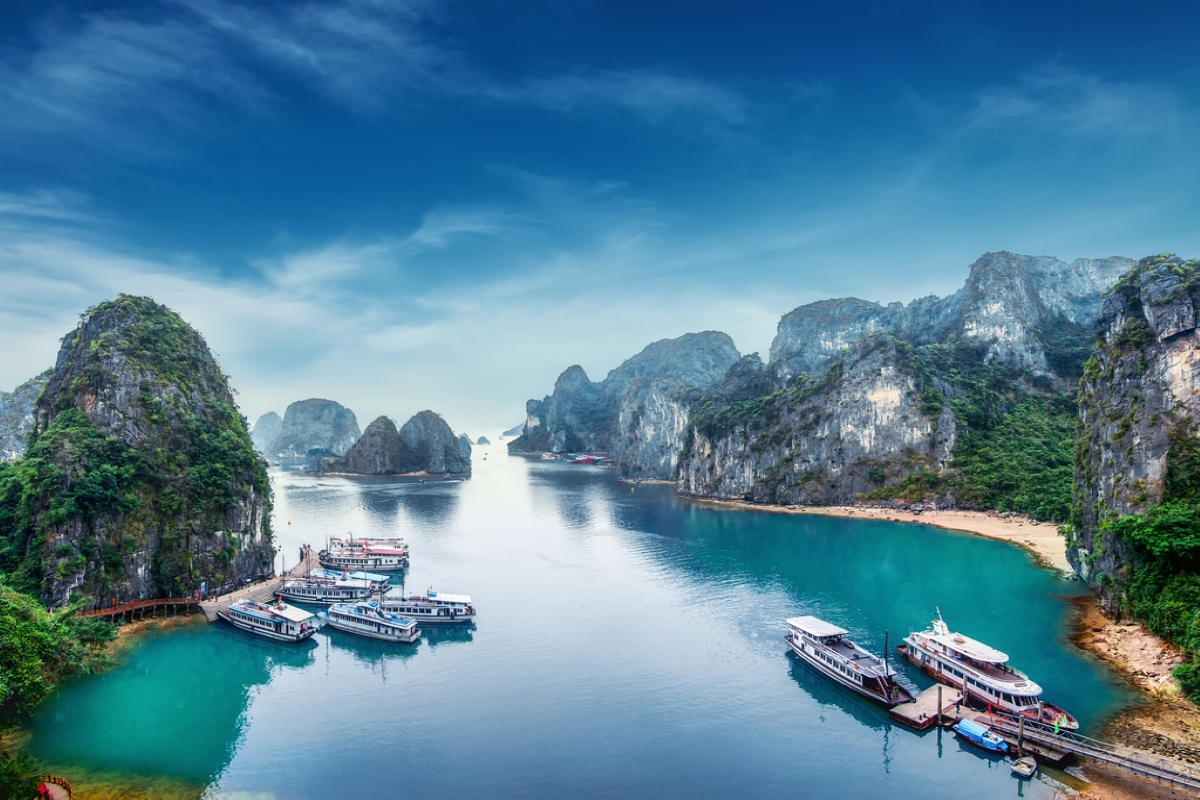 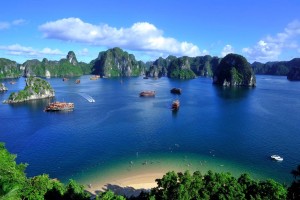 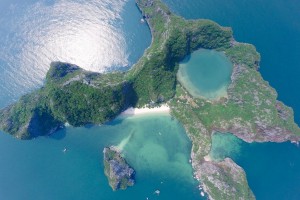 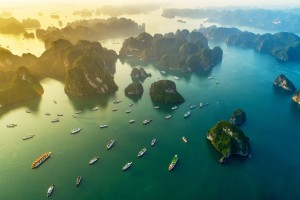 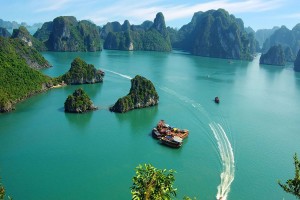 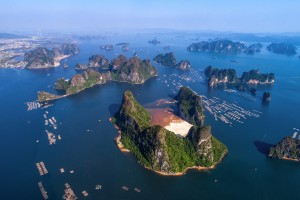 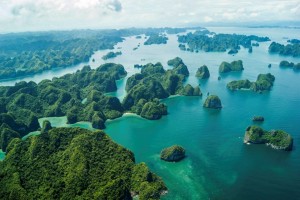 Tuan Chau Island: As our helicopter takes off from the bustling and vibrant Tuan Chau Island, passengers will find themselves fascinated by the chains of luxurious 5-star hotels and various entertainment forms scattered across this beautiful jewel of Ha Long Bay.

Thien Cung Cave: Located in the northern tip of Dau Go Island, 4km away from the ship harbor, Thien Cung Cave is one of the grandest and most beautiful caves in Ha Long Bay, possessing a wide range of limestone and stalagmite system. The surrounding area is luxuriantly covered with diverse flora, giving Thien Cung Cave a marvelous green view from above.

Dau Go Cave (Wooden Stakes Cave): The next destination which passengers would gain the opportunity to experience a breathtaking bird’s eye view is Wooden Stakes Cave. This bow-shaped like island is a historical site famous for its legend about the heroic battle against the Mongolian invasion in the 13th century by Tran King. History has it that the Tran King hid woodpiles used for destroying the enemy’s ships on Bach Dang river inside the cave. Due to its tourism potential and historical value, Wooden Stakes Cave was honored Grotte des Merveilles (Cave of Wonders) in the book Merveille de Monde (Wonders of the World), published by a French author in 1938.

Titop Island: Titop island, which is located about 7 - 8 km in the south of Bai Chay cruise ship port, possesses crescent shaped like white sand and the aquamarine water sparkling against Ha Long Bay’s sun all year-round. A view from above, of different sand layers lying on each other, running continuously towards the crystal clear, glistening green sea is what tourists in a helicopter can enjoy.

Sung Sot Cave (Surprising Cave): Surprising Cave is located in the center of the UNESCO World Heritage. From a bird’s eye’s view, the cave looks like a gentle giant covering some 10,000 square meters, sleeping soundly in the middle of a green vegetation carpet. The cave was given a strange name but it has somehow managed to express fully the feelings of visitors entering the two caverns of Surprising Cave, which are home to a unique stalactite system that allows one’s imagination to run wild, conjuring up all kinds of fantastic creatures and fanciful creations as they walk through the majestic structure. The Surprising Cave is currently ranked first in the list of famous landmarks in Ha Long Bay.

Ho Dong Tien Cave: Upon leaving Sung Sot Cave, passengers will be on their way to discover the next tourist attraction which is Ho Dong Tien Cave. Ho Dong Tien Cave is not only home to the stalactite curtains running down from the ceiling and those rising from the ground, connecting the two parts together, but also an ideal residing home for curious animals living the dark. From our helicopter, you can fully enjoy the beauty of the Fairy Lake located in the middle of the complex, which is surrounded by magnificent limestone mountains and diverse vegetation. The emerald water nestles itself in a special ecological environment rich in many endemic species.

Trong Cave (Male cave): Male Cave is associated with a touching, yet tragic love story between a young woman and a hard-working fisherman residing in the village. Though deeply in love with each other, they could not be together as the woman was bound to marry a rich landlord. Dissatisfied with the forced marriage, the woman fled to a desert cave, which was later named Virgin Cave. Drowned in disappointment and sorrow, she petrified while waiting for her love. The fisherman followed her but unfortunately, got stuck in a cave opposite Virgin Cave (the present day Male Cave) because of a ferocious storm. He smashed the rocks into the wall to call out for the woman until he too, turned into a stone statue, gazing towards the Virgin Cave. Still now visitors can hear the wind blows in the slot of rocks then bounce back walls, creating drum-like sounds, which many people believe represent the sound of the fisherman reaching out for his love.

Cua Van Fishing Village: Cua Van Fishing Village was derived from two ancient fishing villages in Ha Long Bay namely Giang Vong and Truc Vong village. Its model represents the first floating cultural center for fishing communities built in Vietnam. A view from the air reveals the extremely romantic landscapes of the village with cozy and colorful wooden houses tying together for strength against fierce storms. Another panoramic view passengers can see from our helicopter is the gentle and peaceful scenery of bamboo rafts floating in chains on the water surface. From a bird’s eyes view, the village nestles itself in the majestic limestone mountains, which would leave a deep and unique impression in anyone. The untouched life of both the culture and nature here has contributed to the preservation of Cua Van’s pristine beauty dating back a thousand years.

Vung Vieng Fishing Village: Admiring Vung Vieng Fishing Village from above, passengers would find themselves mesmerized by the breathtaking view of the ancient village’s charm. The boats eye-catching colors, create a picturesque scenery bobbing on the immense bay. On the calming sea waves, the floating houses seemingly linked with each other give tourists a tranquil and romantic view. As the village is shielded by the massive limestone mountains with huge rolling rocks and jade green sea, Vung Vieng village appears to be an ink-painting picture from the helicopter.

Cong Do Island: Cong Do Island is located in the southeast of Ha Long Bay, about 24km from Tuan Chau cruise ship port. The island is famous for its enchanting features which visitors can only appreciate fully from above. Such features include the yacht-filled waters, the exquisite lagoons that nature has built in multiple shapes and sizes and the various hills covered with green vegetation. Due to its shimmering white sand and winding beaches, Cong Do island has become an ideal stopover for tourists kayaking in the surrounding area.

Bai Tu Long National Park: Bai Tu Long National Park is an integral part of Bai Tu Long Bay. It contains rich marine ecosystems with 2/3 of the area being the marine surface of the national park and is home to many rare animals and plants species recorded in the Red Book. The park covers a total area of 15.783 ha, with 6.125 hectares of forest and 9.650ha of sea and tidal wetlands. While in flight, tourists can capture the natural landscape of a diverse and picturesque complex made up of the glistening water body, white sandy beaches and rocky islands covered with green flora and fauna. The area is acclaimed for its archaeological sites such as the Van Don commercial port which was discovered here, proving the existence of ancient Vietnamese some 14,000 years ago, Bai Tu Long national park has received a certificate recognized as the 38th Heritage Park in ASEAN.

Reu Island: Reu Island is a small island located about 600m away from Bai Chay beach. The secluded island nestles itself in the scenic beauty of Ha Long Bay’s tranquil waters and rocky islands. Its visual secrets, which are best revealed from the air, is ahead to greet all our passengers on their journey.

a. Pricing
Prices are subject to change depending on currency exchange rate and tax at the time of the booking.

b. Tour schedules
Tour schedules are subject to change at the pilot’s discretion as a direct result of bad weather condition, a maintenance issue that was unplanned or some other operational issue beyond our control.

c. Flying with Children
Children under 24 months of age are not allowed on board for safety reasons. Children 24 months and older require an individual full-fare seat.

d. Luggage
You are permitted to bring personal items such as cameras, phones, glasses or sunglasses aboard the aircraft. Purses, bags, handbags, camera bags, scarves, hats and other loose items of clothing will need to stay at the heliport in a private secure locker.
To ensure the flight safety, passengers are not allowed to carry explosives, flammable substances, metal corrosive substances, sharp objects and any objects threatening to cause harm to other passengers on board and the helicopter itself.

e. Weather
All flights are subject to weather and light conditions at the pilot’s discretion. VNHN will not be held liable for any cancellation as a result thereof.

f. Additional Waiting Time
While every effort is made to accommodate a passenger’s request for additional waiting time, this will depend on VNHN’s commitments. After a free 15-minute grace period, an additional charge of 15% of the service price will come into effect. A delay of more than 30 minutes will be considered as a no-show and charged accordingly.

g. Late-show
Timing is very important for a helicopter tour and VNHN will not be able to accept any delay. Should the guest be late, the helicopter will depart without them and/or the tour shall not be reimbursed.

a. Bookings must be made at least 1 hour in advance to allow time for the Operation Manager & pilot to prepare the flight plan, schedule and authorizations.
b. The minimum passengers for each flight is 4 passengers. If only 2 passengers request the flight, they will have to bear the cost of the 2 empty seats. (For example, the 2 passengers will pay 4 x US$ 1.25)

a. A fee of 30% of the service price will be applied if a request for rescheduling is received between 30 minutes and 24 hours prior to the scheduled mission time.
b. No re-scheduled will be accepted shorter than 30 minutes prior to the flight time and will, therefore, be treated as a cancellation. 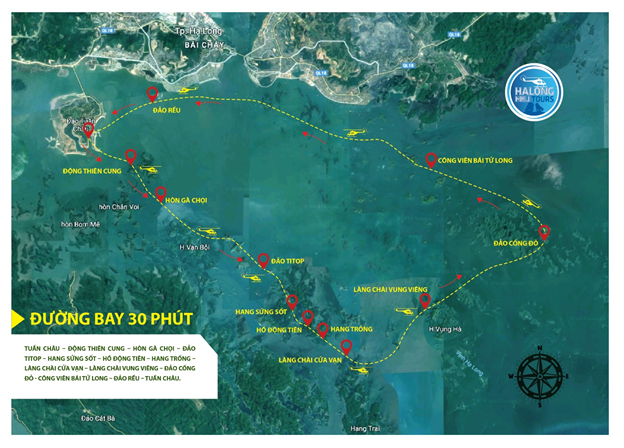 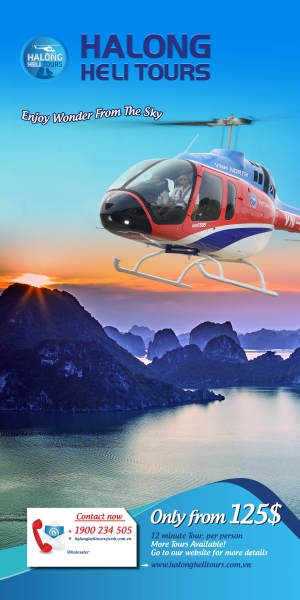 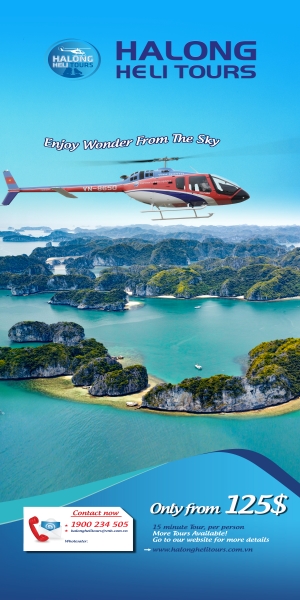